Girls experience Christmas from the sky 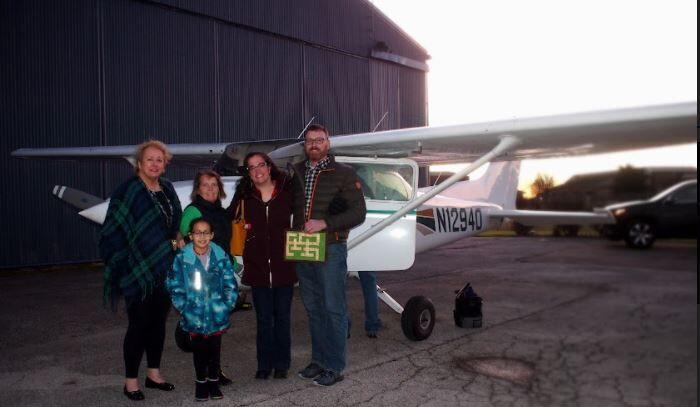 Laylah Gonzales, 9, and her family gathered at Niss Aviation before taking off in a 1974 Cessna as part of an experience through the Visual Bucket List. Volunteer pilot Darren Hamilton donated the flying excursion. MANSFIELD – Sunday evening, Morgan Cook, 14, Laylah Gonzales, 9, and their families gathered at Niss Aviation before taking off in a 1974 Cessna to view the beautiful lights of Kingwood Center, Snow Trails, downtown Mansfield, and other large holiday displays from the sky. While seeing Christmas lights with family is a cherished childhood memory for many, for Cook and Gonzales these memories take on a heightened meaning as both girls are visually impaired and at risk of continued vision loss. Morgan Cook, 14, climbs aboard the plane piloted by Darren Hamilton for her Visual Bucket List flight. “Morgan’s body is fighting to be blind, and we’re fighting to try to save her vision, embrace the vision that she has, and try to make memories,” said Cook’s mother, Catherine. Filling children’s minds with colorful memories in case their worlds one day go dark is the mission of The Visual Bucket List Foundation (VBLF) who, in partnership with volunteer pilot, Darren Hamilton, provided the experience to both families. As Hamilton prepared the plane, Gonzales presented Christine and Steven Myers, co-founders of The Visual Bucket List Foundation, with a piece of artwork she created — a colorful crossword with terms relating to vision. Recently named Small Non-Profit of the Year by Richland Chamber & Economic Development, The Visual Bucket List was formed in 2016 by Steven and Christine Myers, whose daughter Elizabeth was diagnosed with Usher’s Syndrome Type 2A, an extremely rare condition that can lead to gradual hearing and vision loss. The Myers created a “visual bucket list” soon after their daughter’s diagnosis, determined to fill her mind with incredible sights and visual experiences to last a lifetime. Realizing the value of the memories they were creating for their daughter, the Myers started The Visual Bucket List Foundation in an effort to pay it forward to other children who could also lose their vision. For […]