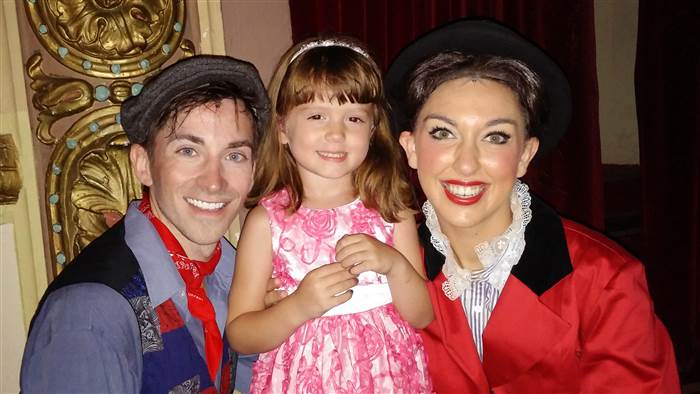 Steve Myers wants his 5-year-old daughter to catch as many fireflies as she can. He wants to take her on hikes to nearby mountaintops, visit the zoo and look through observatory telescopes as often as possible. “We’re trying to get her around to all those places to burn those memories into her mind for later,” the Ohio dad said. Lizzy Myers, at a local production of ‘Mary Poppins’ His daughter, Lizzy, has Usher Syndrome Type 2, a genetic disorder that causes partial hearing loss and progressive blindness. For now, the young girl wears a hearing aid and can see fine, so Myers and his wife have created a “visual bucket list” of things they want her to experience in case she loses her sight completely. They expect Lizzy’s sight to worsen sometime after she reaches early adolescence. She first will lose her ability to see at night, and then start to experience tunnel vision. RELATED: ‘There’s nothing you cannot do’: How a blind woman ran 14 marathons Lizzy was diagnosed with Usher Syndrome a little more than a year ago after her parents sought help for her speech problems. Initial testing revealed she suffered from bilateral hearing loss. The Usher Syndrome was discovered through additional genetic tests. “If we had not done that, then this would have been hitting us in the face. She would have been losing her night vision, and who knows how bad before we even knew it was happening,” said Myers, who hopes his family’s story will encourage other parents to get their children tested. RELATED: Peter Alexander on why his sister won’t let going blind, deaf hold her back For now, Lizzy sees clearly. “She sees perfectly fine. There’s no indication that she’s losing any of her night vision or anything like that,” he said, although he did get nervous last weekend when the family went to see a local production of “Mary Poppins.” “Every once in a while she would look and squint, and it makes you nervous,” he said. “But far her sight should be fine. We think we have between 5 […]