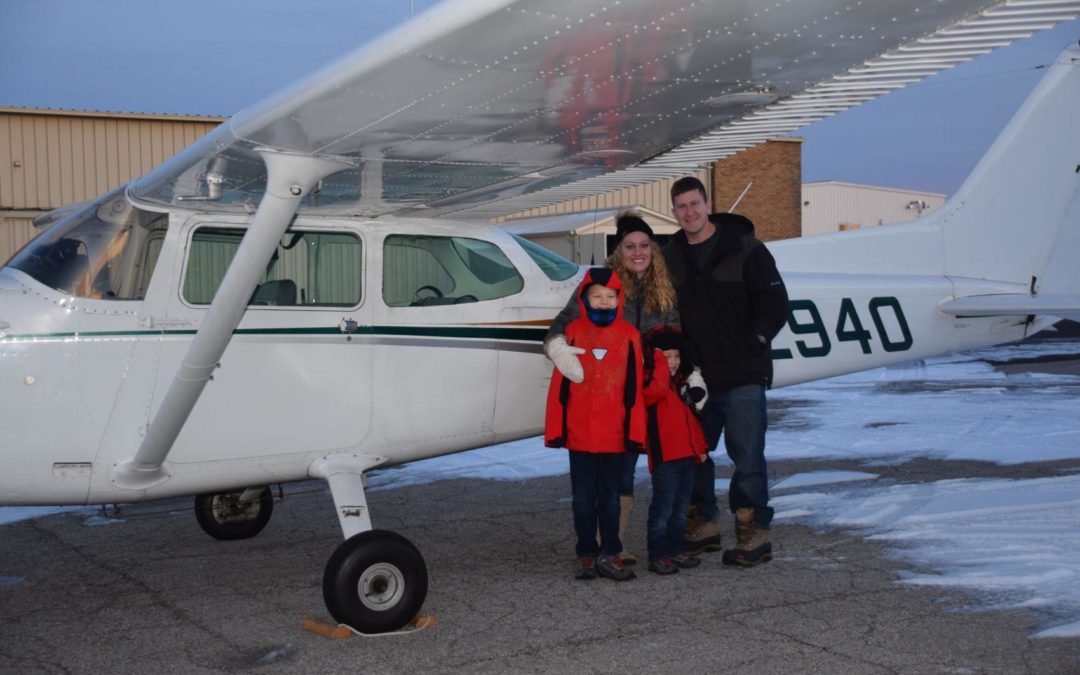 Ben and Angela Brown of Mansfield pose for a photo with their sons, Bronson, 8, and Benson, 4, before Angela and two boys take a plane ride over the city to see Christmas lights. MANSFIELD — Two Mansfield boys and their mother had the chance to see Christmas lights from a new perspective Sunday night. Angela Brown and her husband Ben often spend December evenings driving Bronson, 8, and Benson, 4, around the city looking for festive displays — partly because it’s affordable family fun and partly because they want to create lasting memories for the boys, especially Bronson who has a rare ocular disease. These short road trips feature loops around Mansfield neighborhoods in their Toyota 4Runner and frequently end with a cup of hot chocolate at home. But on Sunday, the Browns opted for a different type of transportation, a 1974 Cessna airplane, thanks to Mansfield-based nonprofit, The Visual Bucket List Foundation and volunteer pilot, Darren Hamilton. “This lets us see the lights from a different view,” Angela said. “I think it’s really an opportunity to experience something you typically don’t, and for Bronson, we never know what the future holds for him, so this is really awesome for him to see this.” At age 3, Bronson was diagnosed with combined hammartoma of the retinal pigment epithelium (RPE) and choroid, a disease that can cause progressive vision loss. Bronson is already blind in his right eye. Minutes before sunset at the Mansfield Lahm Airport, Angela Brown boarded the plane with her two boys, while her husband watched nearby. There wasn’t room for all four of them and Hamilton. “I feel awesome,” Bronson said. He was quick to crawl into the passenger seat beside Hamilton, while his mother and brother climbed into the back seat. Hamilton, an operations group commander at the 179th Airlift Wing, expressed intentions to take the family for a 30- to 45-minute ride. He’s been flying children for The Visual Bucket List Foundation for several years. “Maybe three years ago, the airport manager here got a call from Steve (Myers), and he said, ‘We’d […]