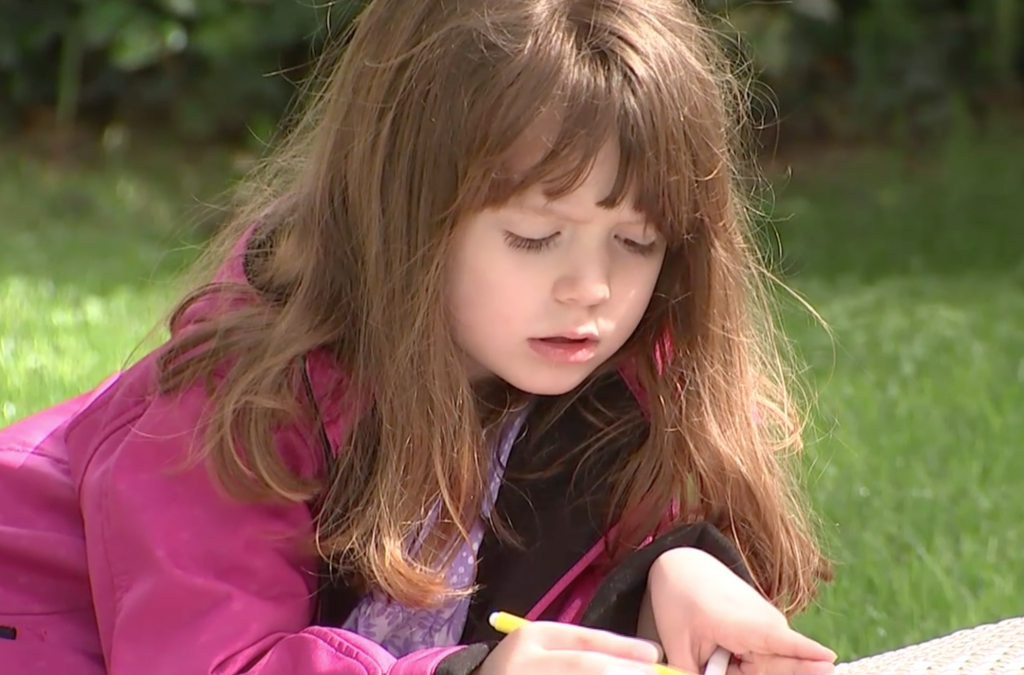 Five-year-old Lizzy Myers drawing in a garden in Rome. Freeze frame of video shot by AP Television Cameraman Paolo Lucariello. April 2, 2016 Dear Blog Readers, This past week we have been following the story of little Lizzy Myers, the five-year-old girl from Mansfield, Ohio who has come to Rome with her family as part of a “visual bucket list” they are trying to complete before she goes blind. By the time you read this post Lizzy will probably have had her chance to greet Pope Francis at his Wednesday weekly audience where she is expected to be sitting at the front. Lizzy has a rare genetic disease called Usher Syndrome Type II A which is slowly taking away her hearing and gradually making her blind. Lizzy does not know yet this is going to happen. Her parents, Steve and Christine, decided to make up a “visual bucket list” so their daughter can see many of the wonders of the world before she loses her sight. Steve, Christine, Lizzy and Kayla Myers visit the Coliseum in Rome April 1, 2016. Freeze frame of video shot by AP Television Cameraman Gianfranco Stara Speaking to the AP last Saturday in the garden at their hotel on the Appia Antica in Rome, her parents explained that the list has many simple things on it like catching fireflies, seeing a rainbow, swimming in the ocean, and viewing the stars and the moon. The Myers family lives near the Warren Rupp Observatory in Ohio so Lizzy and her friend got a special trip to the observatory to check out the night sky through a big telescope. The trip to the observatory made it onto the local news and before they knew it the Myers had an invitation from the head of Turkish Airways for a flight to anywhere in the world. “It took us all of about 30 seconds to decide that Rome was the place,” her father, Steve Myers, told us, “Both because we are Catholic but also because of Lizzy’s interest in art and big things, you know, history. It wasn’t a […]