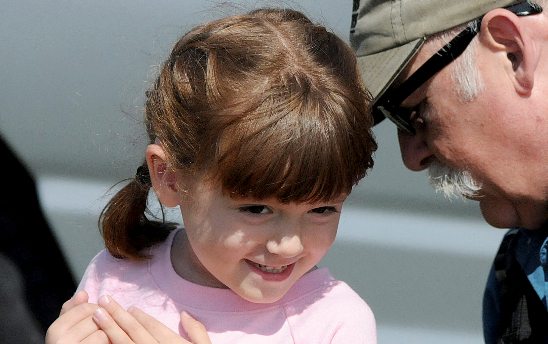 This Friday, Sept. 19, 2015 photo shows Elizabeth “Lizzy” Myers, left, being fitted for a microphone by a CBS sound man before taping a segment in Lucas, Ohio. Myers, a 5-year-old Ohio girl whose parents created a “visual bucket list” for her because she’s slowly going blind is going to meet Pope Francis. Steve Myers told the Mansfield News Journal on Thursday, March 24, 2016, that his daughter Elizabeth “Lizzy” Myers is visiting the Vatican next week. (Jason J. Molyet/News Journal via AP) NO SALES; MANDATORY CREDIT ROME- When the parents of Elizabeth “Lizzy” Myers, a five-year-old girl with a rare genetic disorder causing her to go blind and deaf, created a “visual bucket list” of people and things she should see with her own eyes before it’s too late, they decided to aim high. They chose to shoot for seeing Pope Francis himself, after Turkish Airlines volunteered to fly the family anywhere in the world for a two-week vacation and suddenly a trip to Rome seemed doable. The request to see the pope moved the hearts of many people in Myers’ native Ohio and around the world, who began setting things in motion to make it possible. In fact, Myers was all set to see the pope on Wednesday in St. Peter’s Square after his weekly general audience, and the Vatican even had the appointment on its official run-down of weekly activities. In the end, however, the family will have to wait just a little longer before ticking a papal sighting off the bucket list – their flight out of Columbus, Ohio, was delayed, and by the time they got to Chicago their onward flight to Rome had already left. On background, however, Vatican officials say that whenever the family makes it to Rome, they’ll try to engineer a chance for Myers to see the pontiff. Turkish Air offered the tickets after an employee in Chicago saw the young girl on CBS, where the family told her story last September. The family chose Rome not only because of Pope Francis, but also because visiting the city is a […]